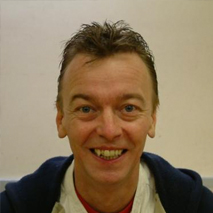 Richard trained at The Corona Academy and has been in the industry since the age of four when he made his first television commercial for lemon pie.

Richard has, over the years worked as an Actor, Director, Writer, Producer and even a set Designer. He has faciliated hundreds of Youth workshops and run Blag Youth with his wife Lynn.

UK tours and West End include ‘Joseph and the Amazing Technicolor Dreamcoat, Having a Ball, Swanester, Wind in the Willows, Life Imitating Art (Pump House Theatre, Watford), Having a Ball (UK Tour), The Fire That Consumes (Mermaid Theatre, London), The Night of the Jockstrap (Revival), Rip Em Off, Andy Capp, Snoopy, You’re a Good Man Charlie Man and various pantomimes and children’s shows.

As a writer/performer Richard won the Edinburgh Fringe Festival award for ‘The Night of the Jockstrap’ in 1981! He has also co-written and performed in: ‘Entertainment my Arts!’ (Arts Theatre, London and UK Tour) and for the past 20 years have co-written, produced and performed in Blag’s annual Christmas revue at the Pump House Theatre, Watford.